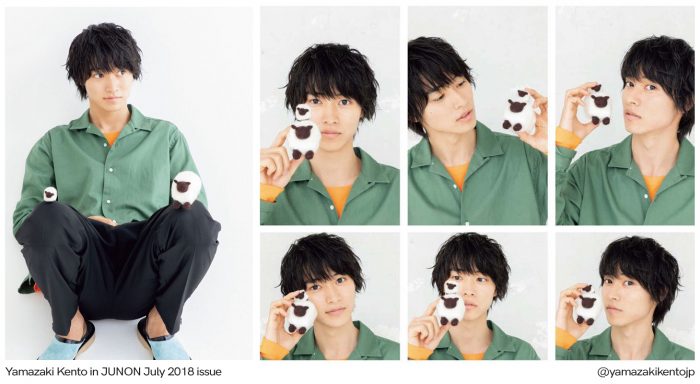 Lovely photoshoot of Kento with the toy grand piano, and with the little sheeps =D A two-fold poster comes with the magazine as well, and I’ve joined both pages to form this =D It’s a really long interview so I shall translate only some of the more interesting parts, or parts which I haven’t covered from other interviews!

The role Kento plays Tomura Naoki just stepped into society and is in his first year on his job. Kento is also still young like Tomura although he’s been in showbiz for 8 years now. Kento and Tomura are similar in the way they both work hard steadily (kotsu-kotsu, i.e. one step at a time), but the difference is that Kento doesn’t take notes like Tomura, who’s often seen with a notebook and pen in his hand. Reason is, simply because he forgets to (lol). He only remembers later, then frantically writes down in point form.

What’s the similarity between the job of a piano tuner and that of an actor? “Failure can also become a valuable learning experience. In the movie, Tomura was told by his sempai Yanagi-san (Suzuki Ryohei), ‘Perhaps, to be “talented” means to possess the feeling of loving something deeply’. On the day Tomura failed big time, he was told by his big sempai (Miura Tomokazu), ‘It will start from here’. All these words gave Tomura the push on the back, and I was also encouraged to do my best. It’s important to turn what’s negative to positive. And I feel that this applies to any job in any industry.”

While they stayed in Asahikawa to film the movie, he went out with Suzuki Ryohei many times, to eat loads of food – Kento’s favourite is indeed the shio horumon – and to Asahiyama Zoo too. At the zoo, he felt that the way the penguins walk were cute but his favourite were the monkeys. “Although they look like humans, they are so free. I thought they were interesting and was always watching them (lol).”

“Ryohei-san was always searching online for information. When there were things we didn’t know, he would look it up straight away. Something funny was… all of us piano tuners had to wear watches. One day he suddenly said ‘Tomura’s watch is so kakkoii!’ and he started looking it up online, then said ‘Isn’t it more expensive than mine?!’ (lol) Like this, we were always having fun during the filming.”

About Sano Hayato who plays his brother, Kento said “Sano-kun had an audition for a drama at that time, so he asked me for advice. I told him that when I auditioned for a drama back then, I said ‘I’ll do anything!’, so perhaps he could go with that. But when he actually put it to practice, they said ‘OK, next’. So we were talking about how my advice wasn’t really useful (lol).” (Admin note: Kento said that during his audition for Atami no Sousakan. They really got him to pose naked in the drama since he said he would do “anything” ne LOL).

Tomura met Itadori and that changed his life. Was there any meeting so far that was life-changing for Kento? “I was scouted and entered this world. That was without doubt a life-changing encounter. At first I thought that he was only asking for directions (lol). When someone I didn’t know suddenly talked to me, I felt a little apprehensive. But after hearing more, and my mother seemed keen, I tried to devote myself to it. And I’m glad I did, cos it was indeed life-changing for me.”

What is it that you’re addicted to right now? “Indeed, at the moment, it’s acting. There wasn’t specifically something that sparked my interest in acting. At first I just somehow started acting, but while at it, I realized the joy and difficulty, and experienced all kinds of emotions. Before I knew it, I was addicted. Right now, I’m really enjoying it.”