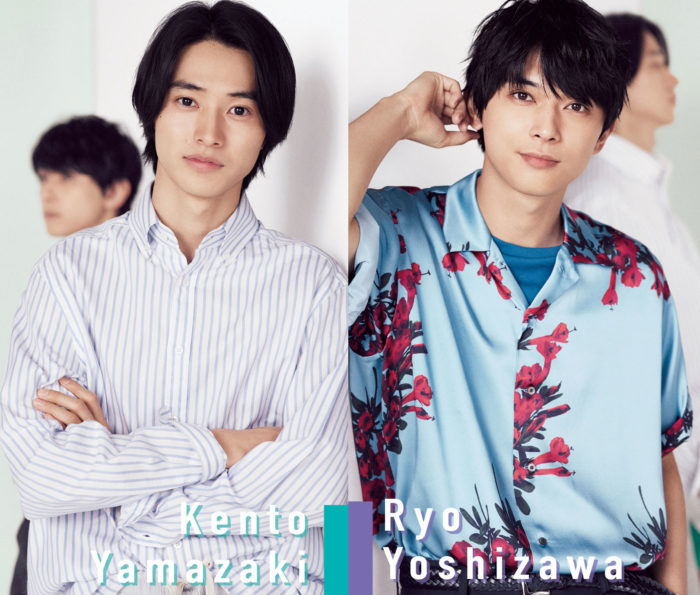 K: Hmm… Both of us, I guess.
K: Oryo kinda hates losing, right?
R: Well, I guess it’s normal. But don’t people in this line hate losing?
K: That’s true. When it’s work, perhaps I also hate losing. But I guess between the two of us, we don’t compete with each other or fight over anything. Most of the times, we say things like “Let’s continue to do our best from now on”, right?
R: That’s right. That’s why we are both harmonious.

Q: Who’s the childish one!?

R: This is definitely Kento!
K: Well… Well, I guess it’s me~ By a narrow margin.
R: Narrow (lol)!?
K: There were times when Oryo fools around too, but if you do a comparison, I guess I fool around more.
R: Kento is a youth, you know. He likes things like UFOs.
K: Ah, I like UFOs (lol).
R: And urban legends like subterranean people etc., right?
K: Yes. I’m really interested! I wonder if I have middle school second year syndrome?

[*T/N: In Saiki K., Ryo was the one playing the Chuunibyou character ne~ I can so see Kento playing that role too lol]

Q: If you fight each other, who is the stronger one!?

K: I think I’d be totally defeated by Oryo.
R: If I’ve a stick/rod, I’ll win 100%. Because I did Kendo before. But if it’s a ball-related battle, I’ll definitely lose.
K: Indeed (lol). Because I used to play soccer.
R: But we won’t know until we’ve actually done it right? Even if I had a stick/rod, I might lose cos Kento also did quite a lot of action in ‘Kingdom’.
K: Because I’ve been ‘awakened’ right~ (lol).
R: If we do it now, we might be equally matched.

Q: Who is the romantic one!?

K: There is a possibility it’s me…
R: The other day we both went to Hawaii for work. Then, on the last day, Kento started saying “I want to go to the beach at night”. Because I thought it’s troublesome, I said let’s drink in the room first then think about it again, but he asked me like 3-4 times, “Oryo, wanna go?” (lol).
K: There were too many people there in the day. The stars above the night sea were beautiful, and listening to the sound of the waves makes you feel good!
R: We were there for about 1 hour. Well, it was fun (lol). Q: Who’s afraid of being lonely!?

R: Kento, I guess. But in fact…!?
K: It was when we were in Hawaii and I said let’s drink, but before that I was in my room discussing with some staff on the meetings for the next day. Then, Oryo came and said “Please don’t make me sleep” (lol).
R: Ahaha! I was all ready to drink. Usually I don’t feel lonely at all if I’m alone, but I’ll end up also calling Kento along.
K: During the ‘Kingdom’ filming in China too, we’ll be inviting each other “Wanna have dinner?”

K: Both of us can totally drink.
R: But I can drink every day even if I’m alone, so I guess I’m already well-trained (lol).
K: When the two of us drink, we can drink till mornings. Under Oryo’s influence, beer has kinda become my favourite alcohol drink. When we drink, the both of us become stupid.
R: We’d be laughing non-stop about boring random topics.
K: Then, sometimes masterpieces will be born.
R: Apart from me, nobody else will understand what you’re talking about (lol).

Kento to Ryo: Although you basically like to be alone, you’re very accommodating to me and your presence alone makes me feel at ease. I really love your sense of humour which lets us enjoy silly things together.

Ryo to Kento: You’re a romanticist and you’re afraid of being lonely, but you’re the strongest man with a beautiful heart and someone who never talks bad about others. Everyone can’t help but love you, my comrade pursuing the same dream as me. To me, you are an or~di~na~ry friend whom I really love (lol).

[T/N: I’ll be skipping some parts which were already covered in the other mags I’ve translated.]

R: We know each other too well, so during the really serious scenes, there were moments where it got a little embarassing. It was like “that guy is really serious about this!!!” (lol)
K: Yes, yes. But the mode we were in during ‘Kingdom’ was different, right? If it were a Fukuda Group production, we’d surely be laughing.
R: Yeah. This time we were both really serious!

K: I borrowed a lot of shows to watch, movies that were recommended by the action director, from the classic ‘Enter the Dragon’ to ‘Monkey Fist’ that stars Yuen Biao.
R: Only Kento would have done such a thing. To begin with, he has good physical ability. There’s a scene where he ran on the wall, grabbed the enemy’s neck and made a turn, and he did it without a stuntman. He didn’t only use his sword, but his entire body to bring down the enemy. That’s really very Shin-like.
K: Oryo did Kendo before, right? His fighting moves were indeed beautiful, and during the practice, I was thinking he’s way better than me.
R: Sei trained as part of a royal family and his fight was beautiful, but Hyou’s fight on the other hand was closer to Shin’s and had a wild feel. It was quite difficult to differentiate their fighting styles. We practiced super hard for the Shin vs Hyou scene.
K: We were desperately practicing for the scene, but the actual take itself was more of a ‘Let’s enjoy this!’ kind of feel.
R: We were laughing heartily and were going like “Ueeiii~” (lol). It was super fun!

Happenings during the filming in China

R: I was happy to be able to act in a set of such magnificent scale that’s inconceivable in Japan. Also, the horses were super dangerous.
K: The horse I was riding was always kicking the horse next to him, the one Oryo was riding…
R: We were filming the scene where we lined up in front of the palace gate, waiting. And my horse started becoming angry and I was like “Don’t do that! Really, stop it!” (lol) “The one riding it, which is me, is scared!”
K: In the midst of the filming in China, we also went for steamboat and yakiniku, right?
R: At first there was only 1 store. Then, not sure if it’s because they heard that Japanese were coming, it suddenly became about 7 food stalls lined up in front of the hotel. In any case, all of them were cheap and delicious!
K: I was on a diet so I was trying not to eat fatty meat. But when we went to the yakiniku shop, in front of us were Osawa-san and Kaname-san eating red meat to their hearts’ content.
R: Ahaha! That happened, right?
K: That day, I didn’t have a choice and also ate fatty meat*. That was funny.
R: In China, we were constantly being brought out by seniors for meals, right?
K: They were all really wonderful people, so it was fun.

*Note: In a separate interview, Kento said that Osawa-san actually ordered up the entire store’s worth of red meat (cos he was also trying to maintain his body as Ouki), so only fatty meat were available that day, and that’s why Kento had no choice but to eat fatty meat that day.

This is the first time a pair of males are featured on the cover of ‘nonno compact version’.

R: This is the best, isn’t it. Nobody else could do it before this…
K/R: nonno pair cover (lol)!
K: It was like a ‘Let’s do it’ kind of feeling, right.
R: Actually it was quite some time back that I heard we’ll be acting together in ‘Kingdom’, so when it was finally official that the production has been decided…
K: We went like “Alright–!!” right?
R: It was our fourth time acting together and once again what I felt was Yamazaki Kento’s greatness. The explosive power and persuasive power in his acting was really amazing.
K: Since the old days, I’ve also always felt that Oryo’s acting was really good, and more than anything else, he’s someone I can rely on. In the sparring scenes with Hyou I was able to place 100% trust in him. Hyou was more than a lover and a family member. I think it was also at the filming location that our love for each other was born (lol).
R: When I’m talking to Shin, my facial expression is also predominantly different. It’s not that I was conscious of it, but I could feel a sense of security from him. I thought that must be because it’s Kento.

Not only as fellow actors, but even in private, the two place very strong trust in each other.

K: The other day, we went to a shoes shop, and both of us were like “Isn’t this nice?”.
R: “Ah, nice!”. Then, “Isn’t this nice too?”.
K: And it was “Ahh, it’s nice right?” (lol)
R: We kept exchanging our opinions. In the end we bought similar sneakers. When I’m with Kento, I can feel his overwhelmingly good personality. He’s even on very good terms with my own staff. He’s a genius well-loved by all!
K: Ussss, thank you! I really love Oryo’s sense of humour. But even though we usually fool around with each other, sometimes we do have rather serious talks.
R: Like “if only we can keep on doing ‘Kingdom’ from now on”, right?
K: Yes, yes. If we can both grow up together and it becomes a series, that’d be perfect!