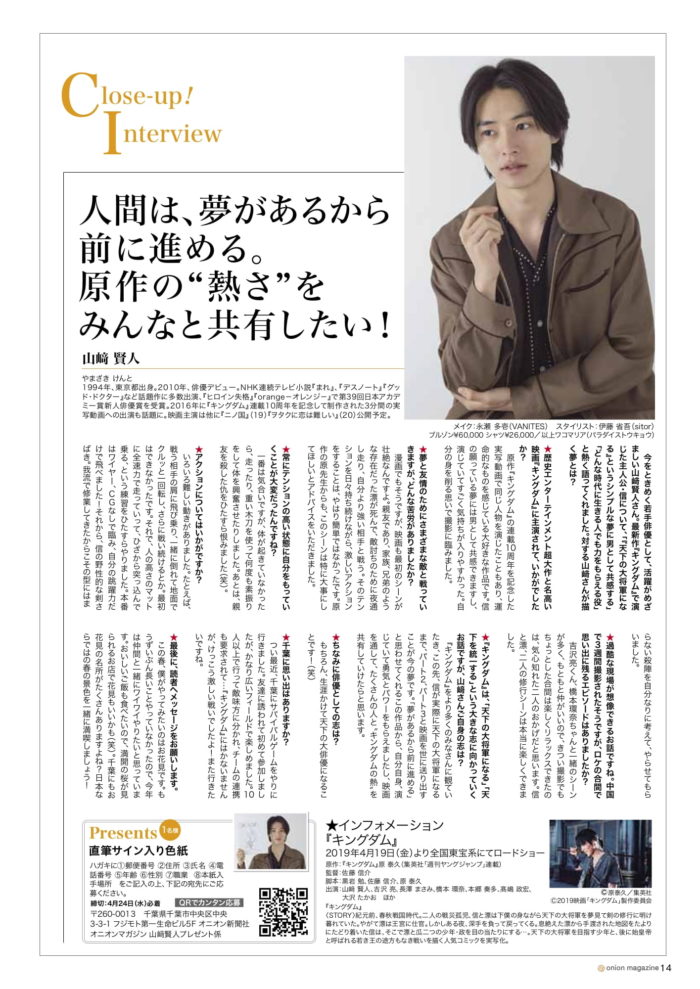 How do you feel about being the lead in a huge historical entertainment work like ‘Kingdom’?

I felt that it was fate that I got to play the same role as I did in the ‘Kingdom’ 10th anniversary special movie. ‘Kingdom’ is a work I really like. As a man, I can understand Shin’s dream so it was easy to get into character. I started the filming knowing I’m going to break my back for it.

For the sake of his friends and his dream, he takes on various enemies. What were the hardships you faced?

It was so in the manga too, but the first scenes of the movie were fierce. My best friend Hyou, who was like a family and brother, died, and I sprinted through the night for revenge and fought an enemy stronger than myself. Keeping such tensed feeling inside me everyday while doing the vigorous action scenes wasn’t easy indeed. Hara-sensei also said that he’d like us to place particular importance on these scenes.

It was difficult to constantly keep that tensed feeling inside you, right?

The most important was to get pumped up, but if my body couldn’t stay up, I did things like run, or swing the heavy wooden sword over and over again, to get my body excited. Also, I hated from the bottom of my heart the ones who killed my best friend (lol).

How did you find the action scenes?

There were many difficult movements. For eg. jumping and riding on the shoulder of the enemy, falling to the ground together, doing a forward roll, then continue fighting. At first I couldn’t do it. So, I ran at full speed towards a mat that’s as tall as a person, plunged my knee into it and mounted it. I kept repeating this practice non-stop. As the actual take would be without wires or CG, I jumped purely using my own strength! Then it’s Shin’s wild kind of swordfight. Exactly because it’s self-taught and self-trained, I thought about his unconventional fighting style in my own way, and was allowed to do it that way.

It sounds like a really harsh filming location. I heard that you were filming for 3 weeks in China. Were there any memorable episodes in between the filming?

There were many scenes I did with Yoshizawa Ryo-kun and Hashimoto Kanna-chan. We’re good friends to begin with, so even if filming was harsh, I was able to enjoy and relax myself a little in between filming. It’s all thanks to these two whom I know well. I was able to really enjoy myself while filming the training scenes of Shin and Hyou.

‘Kingdom’ is a story where you work towards huge ambitions like becoming the greatest general under the heavens, and the unification of states. Yamazaki-san, what is your personal ambition?

For ‘Kingdom’ to be watched by as many people as possible, and in the future, until Shin becomes a great general, to deliver part 2, part 3 of the movie to the world… that’s my dream now. “Because people have dreams, they are able to move forward.” — This movie makes people feel this way, and for me personally, I was able to receive courage and power while acting in it. I hope that through the movie, I’m able to share the passion of ‘Kingdom’ with many people.

By the way, what is your ambition as an actor?

Of course, it’s to spend my life to become the greatest actor under the heavens (lol).

Do you have any memories of Chiba?

Just recently, I went to Chiba to play a survival game. I was invited by my friends and it was the first time I participated in that. We played in a rather wide field and I was able to enjoy mself. More than 10 of us went and we split ourselves into two teams. Coordination among team members was required too… It can’t match up to ‘Kingdom’, but it was a rather fierce battle! I’d like to go again.

Finally, please give a message to our readers.

What I’d like to do this Spring is hanami (cherry blossom viewing). I haven’t done it in a long while, so I’d like to have a blast doing it with my friends. I’d also like to have delicious food, so perhaps a restaurant where full blooms of Sakura could be seen would be nice (lol). There are also many famous sakura viewing spots in Chiba, right? Let’s fully enjoy the scenery of Spring that’s unique to Japan!