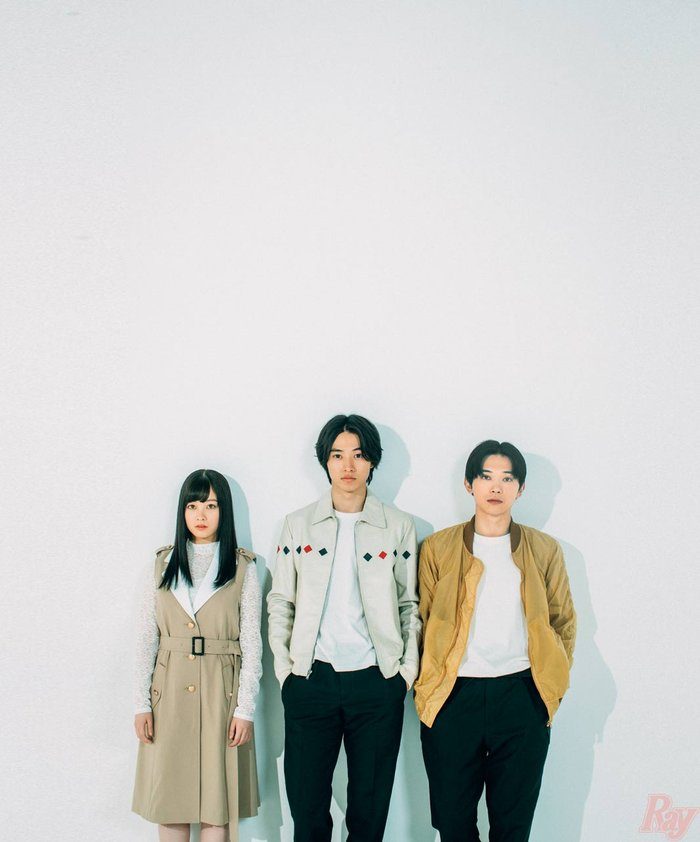 I’ve translated some parts from the crosstalk. Hope you enjoy reading~ KENTO: The scenes of Ten, Eisei and Shin. There were casual moments too so it was fun.

RYO: I really liked the scenes where Shin butts in at Ten~

KENTO: I like all the scenes! All effort and emotions went into every scene and that became a movie. I was moved by that.

KANNA: It’s really amazing right? None of the scenes can be taken away.

KENTO: Moreover, Hara-sensei wrote the lines for the scene towards the end of the movie. In fact, when I said them I also felt very inspired.

RYO: When I watched the movie, I cried so hard at that scene!

KANNA: I loved the opening scenes of Shin and Hyou, and Hyou and Eisei. It’s a story that exists because of the correlation of these people. But, when we were doing the script reading, I was laughing.

KENTO: ‘Cause Oryo did two roles. I was sitting beside him listening and couldn’t take it (lol).

RYO: It was a good thing that the filming was in reverse order, that we started off with the scenes in China first before filming in Japan. We filmed that important scene with Ouki played by Osawa-san first, so it was easy to get into the role. Osawa-san’s presence and body was very persuasive so there was a very strong feeling of tension then. Looking back now, I think it was a really good scene.

KENTO: Same for me. Because Shin is someone who dreamed of becoming a Great General under the Heavens because he saw Ouki when he was young, so it was great to be able to feel Ouki’s aura and greatness at the start of filming. Also, fighting Saji inspired me a lot. Sakaguchi-san is a real life warrior, so during the filming, he told me that I could seriously aim for his head with all my might. But he was able to very quicky respond to all my moves. I think that eccentric atmosphere was brought out in the movie too.

RYO: The filming in China was tough. The filming itself was tough, but living there was also tough (lol). It was in the countryside so the shops were closed really early, and there were days where we didn’t have anything to eat.

KANNA: We ended up eating at the food stalls. And the Sze Chuan food too… when actually I can’t take spicy food….

KENTO: About the food, there’s a yakiniku store that we often go to. When we first went to that store, Osawa-san was already there. I wanted to eat lean meat to reduce my weight, but Osawa-san ordered loads of lean meat to build his muscles, so there weren’t any more lean meat left in the store.

KENTO: I was like “Are you sure? There’s no more lean meat left!?” But I was hungry so I just ordered and ate fatty meat (lol).

KANNA: Also, the filming location was very far from Shanghai. We all rode a huge bus for 6 hours to get there, and on the highway, the bus was moving so fast that luggages were flying everywhere (lol). I’m so glad we got back alive!

RYO: But in China, the view we had was always very grand, so it was easy to get into character during the acting.

KANNA: The filming venues were so huge.

KENTO: The royal palace set was so vast you can’t see everything at once, its on such a huge scale I thought it was a real castle.

KANNA: (softly) I heard that it cost a lot too.

RYO: (softly) I heard that the throne alone costs a million yen.

[Here, the staff told them the real cost of the throne]

RYO: Eh? Don’t tell me this is… a blockbuster?

RYO: I’ve gone for drinks with and have always been close to Kento, but Kingdom was the first time we could talk so passionately about the work we do. I felt that the sense of distance between us has changed a little. I can’t really say such stuff to fellow actors without feeling embarassed, but I’m able to say it to Kento without hesitation.

KENTO: Yeah, it was only after we started doing Kingdom that we were able to have such serious talks. It’s like we were able to bring out our passion because it’s such a passionate movie. I’m extremely happy about it.

KANNA: To Kento-kun, has that distance became further? Or nearer?

KENTO: It has pulled us so much closer! It feels like Oryo is always by my side.

KANNA: Kento-kun and Ryo-kun were there, and I was with them as Ten. We spent a lot of time together so I was enjoying myself. Although the filming was tough, we were always laughing, right?

KANNA: The cast were so funny, and Mitsushima-san who plays Heki was impersonating Tou, right? (lol) I really admire Masami-san, so I felt in bliss just to be in the same filming location as her.

KENTO: Oryo, Kanna-chan and I were doing ‘Saiki Kusuo no Psi-nan’ together, then we overcame ‘Kingdom’ as well, so I feel that we have a strong bond after all. I felt that in the midst of the tough filming, it’s because it’s the three of us that I was able to relax and enjoy our talks during the filming breaks.