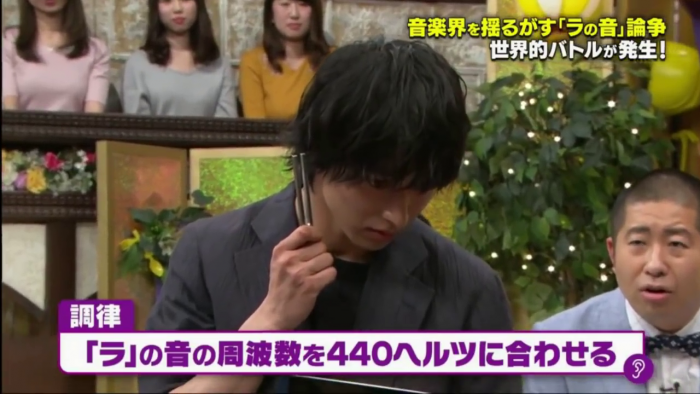 Kento was in the studio throughout the episode, and they showed a lot of his reactions here (he had such a nice smile throughout~), so I’m just gonna share the full ep.

Basically Hayashi-sensei is challenged with certain facts, and he hits either the “I know it” or “first time hearing it (hatsu mimi)” button. I’m not going into detail but I thought the 1 litre milk carton thing was interesting. I’m sure Kento learned a lot on bangumis like this too.

At the start of the ep, the only person Hayashi-sensei shook hands with was Kento lol. They also mentioned how important it is to ‘greet’ and be on good terms with the lighting staff of the television crew. Kento mentioned that when he had pimples once, he was told to ‘go greet the lighting staff’, as he could ‘remove the pimples’ for him.

At about 05:50, they introduced Kento and that he has more than 2.7 million followers on Instagram, making him the no. 1 male artiste in Japan on IG. Hayashi-sensei asked, “Do you know how many is 2.7 million? That’s the entire population of Osaka.”

Hitsuji to Hagane no Mori PR started at around 23:56. Kento used the tuning fork to see if it matched with the “La” note on the piano. What Japanese call “La” is actually the A note above Middle C, which is tuned to 440hz (pitch standard). He then had a small competition with Hayashi-sensei as to which note being played is “La”. Kento said that he heard the “La” note so many times that he’s confident he’d get it right. Indeed! 🙂