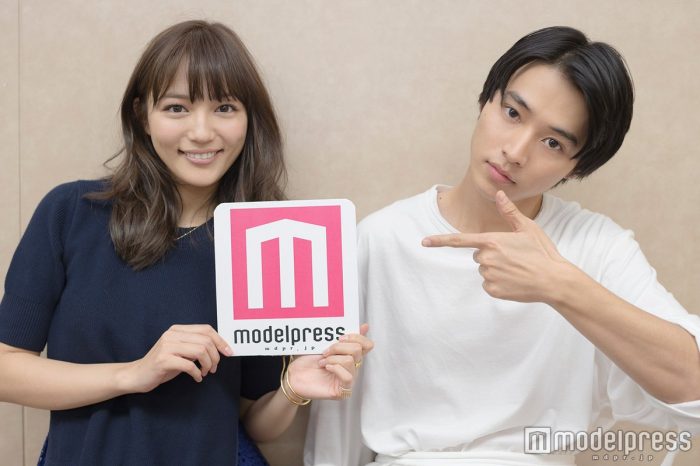 When asked on her impression of Kento before they acted together, Kawaguchi said immediately, “Sparkling! Ikemen! [note: good-looking man]” and added “The role he played this time isn’t supposed to be an ikemen but his acting sparkled and I really could only see him as Hase-kun. I thought it’s a role that only Yamazaki-san could do. He also helped me a lot, and brought out certain parts (of my acting). I really love him as an actor.”

On the other hand, about Kawaguchi, Yamazaki said “Although she’s my age, she’s really cool, and has a refreshing image.” And why so? “I watched ‘Yankee-kun and Megane-chan’ and she was holding things like a bamboo sword right? I really loved that, and honestly, that image of her was really strong (lol).” When she heard that, Kawaguchi was shocked and said “A yankee image!? I don’t get that often (lol).” Yamazaki said “I had the image of her being strong and frank, but this time she’s really delicate.”

Kawaguchi also said of Yamazaki Kento as a person, “He’s friendly and vulnerable (open to attacks) (lol). But I think this part of him makes everyone like him. It was like, before we realize it, he was surrounded by people.” She also added that “He’s weak in the mornings, right? When he comes to the set looking sleepy, it made my heart skip a beat (lol).”

Kawaguchi said that Hase-kun is a really brilliant character, that it’s important to do your best even if you get hurt in the process, so as not to have any regrets. Kento added “I feel the same. You only live once.” In response to that, Kawaguchi said “Kakkoii ne!”, giving him her seal of approval.