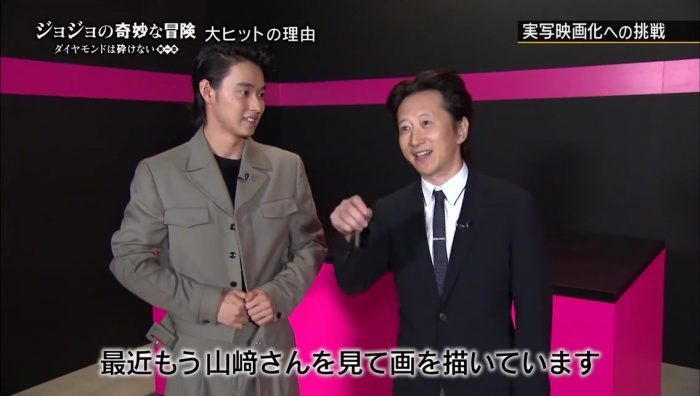 This episode of Minna no Eiga is a special on JoJo. They showed footage from the opening stage greeting on 5 August. Then it was Kento with Araki-sensei at the JOJO Exhibition in Sendai.

Then they showed that cliip on Kento chasing pigeons in Sitges lol.

Next, they showed some scenes of Morioh-cho, and followed with a feature on the ‘enemy characters’ in the movie. First it was Nijimura Keicho (Okada Masaki) and his famous line about putting a CD back in its case after listening to it xD Then on to his brother Okuyasu (Mackenyu), and his first scene in the movie where he was eating a popsicle. [In the manga, Okuyasu has a sweet tooth xD]

Q: When you acted, there were no Stands right?
Kento: There were none.
Macken: We can only imagine them.

Q: I’m very curious how you acted with the Stands.
Macken: It was like killing each other (literally) using our backs. The Stands will appear from the back, so we move our shoulders while imagining that. The director told us to “kill with your backs”.
Kento: We don’t fight ourselves, it’s our Stands that fight each other.

Q: While you were playing your roles, what were your Stands to you?
Kento: We’re one in body and soul.
Macken: It’s a part of me.
Q: Like a partner?
Kento/Macken: No, it’s myself.
Kento: Well, if I’ve to say, it’s like my feelings, or my other self.
Macken: Rather than a partner, it’s myself. Apart from “The Hand”, I don’t want to and can’t use any other Stand.

10:56
Macken: First of all, we don’t usually get to be in such a location set. The CG, Stands, and all that, it’s only something that can exist in JoJo. It was a very precious experience, and we got to go to Sitges. Above all, to be able to act with Yamazaki Kento-san, I felt really blessed.
Kento: *laughs* There are more sempais in this movie.

Then, they talked about the other villain in the movie, Angelo (Yamada Takayuki) and showed a clip of Aqua Necklace vs the two JoJos.

Next up are points where only JoJo fans will understand when they watch the movie.

Clip from the Japan Premiere where Yamada Takayuki talks about how he ‘prepares for the role’ by eating small stones “that Director Miike passed to me” for 4 months before the filming, so that he could successfully become a huge stone — because Miike told him that no CG will be used for that scene lol. Of course when they asked Miike later “you passed him some stones?”, Miike said “don’t believe whatever he says.” LOL.